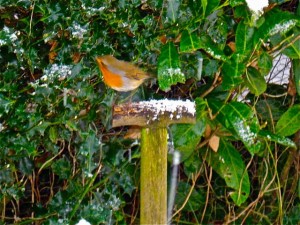 The cold snap is putting robins at risk. A major new study suggests that there are 27% fewer robins this year and that they are at their lowest levels since 1997.  It appears that the birds suffered badly in last year’s hard winter when temperatures across the country were at their lowest for 30 years.

The image of robins in the snow on Christmas cards paints a different picture from their reality. Robins are ground feeders and therefore find it difficult to find food when there is snow on the ground or if the ground is frozen.

The weather station at Woodhill Cottage, here in the Surrey Hills, recorded temperatures of minus 6 last night, with snow forecasted tonight, Wednesday and Thursday. So spare a thought for our red chested friend and put out some food and water on your bird tables.

The cold weather is due to a shift in the jet stream which has held high pressure over Greenland, blocking the usual Atlantic lows that bring us wind and rain at this time of year. Low pressure over the Baltics is forcing cold winds from the north east across Europe. You know how the old saying goes ‘When the wind is in the East , tis neither good for man nor beast’ .

There is, however, another weatherlore saying that forecasts a mild winter for the UK, ‘Ice in November to bear a duck, the rest of winter will be slush and muck’. The ducks have been sliding around on the lake in front of us all weekend. You heard it here first, despite what the Met Office are saying, we are in for a mild winter.

I prefer crisp cold winters, but I’ll be making sure our robins are well fed.