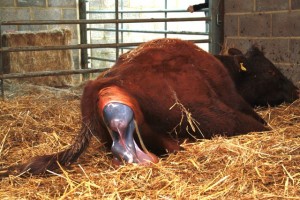 Upper Woodhill Farm’s Andrew Cameron phoned at 6.45 this evening to tell me one of his cows was ‘showing’ and would probably give birth in the next hour. So I jumped in the Landie and headed up to the farm.

Sure enough in Andrew’s maternity pen was a cow well on her way. This was going to be her second calf, her first was recorded on the site last year.

We didn’t have to wait long, a few minutes after arriving the calf’s front hooves could be seen, indicating that it was in a good position. The amniotic sac had not broken and as you will see from the pictures below it did not break until the calf was fully out, just fifteen minutes later.

Andrew pulled the new born calf round to its mother’s head checked to see the sex, announced it was a bull calf and stepped back to let calf and mother bond. Mum licked and prodded the calf into ‘life’ and the little chap had his head up in no time. (See below video)

Two bull calf’s were born on Thursday so thats three bull calfs and one heifer so far this year. Andrew would really like a few more heifers, but its still early days as he is expecting another 14 or so calves this year.

“Oh no,” Andrew says as I leave at 8pm, “I’ve missed Countryfile on BBC1”. “What are you talking about,” I say “you’ve got Countryfile right here in your barn.”