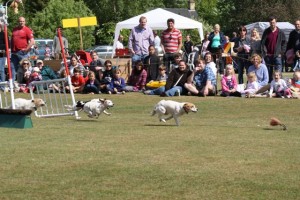 Bicycle Man was great, the Badger Set Band rocked, we almost won a pig when we bowled for one, but it was Cyril the Squirrel and the terrier racing that stole the show at the Bramley Village Fete this afternoon.

Apart from a couple of spots of rain, the weather was kind to this afternoon’s event. Opened by TV’s Fay Ripley of Cold Feet, the fete had plenty on offer, including some excellent plant stalls run by local nurseries, some terrific live music and a very competitive Tug of War which was won by The Weatsheaf team, which was just as well seeing as they were the sponsors of the event.

But it was Cyril the Squirrel in his 4×4 and some very enthusiastic terriers who drew the largest audience and quite frankly the most laughs. Terriers can really shift, even with stuffed jockeys on their backs.

The annual fete raises money for local charities including the Bramley Infant School, the Scouts and Brownies. First reports were that this year’s event would raise around £7-8,000. If you know the final tally please let us know by leaving a comment on the site.