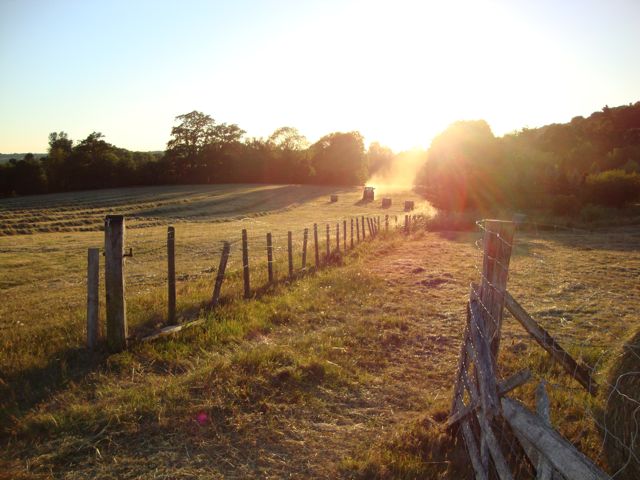 The past month has seen some significant rainfall in the Surrey Hills, spelling an end to a significant drought in the South East. With only 49.4mm of rain recorded in South East and central southern England, 2011 has been the driest spring since for 101 years, beating the previous record of 57.3mm in 1976.

The result for farmer’s crops and pasture has been desperate. Towards the end of May the Surrey Hills’ brown landscape looked more like Spain in August. The problem now is that although the recent rainfall has seen lush green grass start to grow, it is now too wet to make hay.

Andrew Cameron of Upper Woodhill Farm welcomes the rainfall but has decided to let his herd of Sussex cattle graze on the surrounding pasture rather than to put it aside to make hay for the winter. “Through the early Spring it was looking like we were going to have another poor year for pasture. Buying in feed when there is no pasture makes cattle farming very expensive.” Cameron explains, “I have decided to let the cows graze on the new growth and hope that the rain continues. I’ll buy in hay over the next month or so for the winter months.”

Visitors to the site will know that Andrew’s Woodhill herd saw ten calves born in April and May, seven bull calves and three heifers. There are, however, more on the way. Gorgeous George the bull, who ran with the Woodhill cows and heifers last year, seems to have got off to a good start with six of the girls but then took a month off before having another go. As a result Andrew is expecting five or six further calves in July. “Its not ideal to do calving in two stints,” says Andrew, “I aim to have them all in April, but its quite common for a first time bull to have a little rest, so we’ll let him off this year.” Bless him.

We will bring you Woodhill calving part 2 in July so keep checking the site for updates.