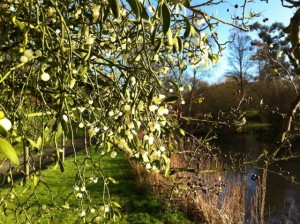 There is quite a lot of mistletoe growing on trees around our area of the Surrey Hills, which is unusual as it is much less common in the South East than it is in the Midlands. The mistletoe capital of the UK is Herefordshire and Worcestershire, with most of what is sold around the country bought at market in Tenbury Wells. Mistletoe is a parasite that grows on the branches of its host tree, sending out roots into its tree to take up nutrients. There are males and females, the females baring a sticky white berry. Their favourite host is the apple tree, which explains their abundance in Hereford and Worcester, counties famous for their orchards. It is of course kissing at Christmas for which mistletoe is famous. Kissing under the mistletoe dates back to druid times where it was thought that the plant held special fertility powers. Mistletoe of the oak was especially sacred to the druids who would cut it with a gold sickle at winter solstice. They believed that mistletoe was the soul of the tree. During the middle ages it was hung around the house with holly and ivy to ward off witches and evil spirits. In the eighteenth century a young lady who stood beneath mistletoe could not refuse to be kissed, such a kiss would deliver love, romance and lasting friendship and goodwill. We have plenty of the stuff hanging in the cottage this Christmas.