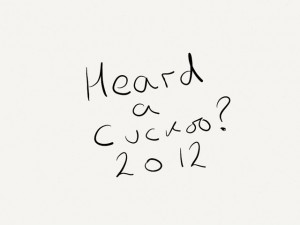 Have you heard a cuckoo yet? Our local cuckoo seemed to be late to arrive to our corner of the Surrey Hills this year and by the end of April we still hadn’t heard its springtime call.

We were away last week but on our return we were greeted by enthusiastic cuckooing – the date I heard it first was 10th May. This is much later than last year when we heard it first on 10th April. This might be due to rain keeping us indoors for much of April, but I have also heard that the record wet April we experienced has confused birdlife and caused it to behave as if it is Autumn. It might just be that the cuckoo is sensible and just stayed in its winter home in the Med until the weather picked up here.

Please leave a comment and let us know when you first heard a cuckoo this year.

Our swallows arrived bang on time on the 16th April – exactly the same date as last year.