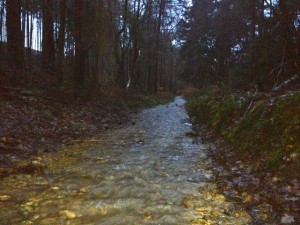 The rainfall the UK experienced in December has led to some significant flooding in The Hurtwood and Winterfold Wood in the Surrey Hills. Water is now cascading off the North Downs and as a result many of the footpaths are saturated. The most notable one being the route from Hurtwood car park 4 down through Winterfold Wood, which has now become a stream bed. It is however quite beautiful down there at the moment. If you put on your wellies or are prepared to get wet on a mountain bike, the route, which ends just shy of Shophouse Lane, Farley Green, now rings to the sound of rushing water. Walking down the cutting you will find a mix of streams, ponds and waterfalls as the water finds its way down the hillside. There is plenty of wildlife out and about, I came close to two deer when I was up there, the sound of the water masking my approach. I wasn’t quick enough with the camera though. 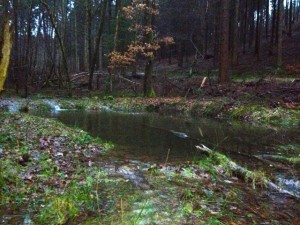 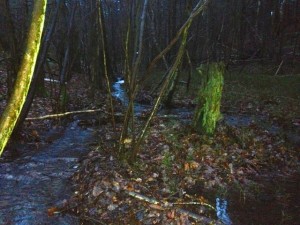