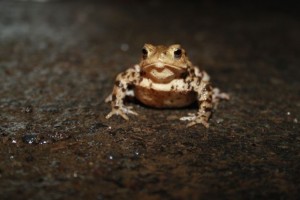 The warmer and wet evenings last week saw the first of the toads starting to make their annual migration from the heathland on the hills where they hibernate, down to the ponds around Woodhill Lane. Visitors to this site will know that every year towards the end of February around two to four thousand toads make this migration to mate and lay their spawn. To get to the ponds they have to cross Woodhill, Stroud and Madgehole Lanes which can get busy at rush hour. Many fall victim to passing cars, but the death rate is greatly reduced thanks to the work of Jan Larter, Danial Winchester and their team of volunteers from the Surrey Amphibian and Reptile Group – SARG who patrol the lanes, collect the migrating toads and take them safely across to the ponds.

Each year the numbers making the migration are recorded. 2010 saw just under 4,000 collected, the most in recent times, but in 2011 this number dropped to 1,500 and last year just 950 were counted. This is causing concern that the numbers are dwindling and suggests that increasing amounts of toads are falling foul of the road. Weather, however, is also a significant factor as the toads tend not to move when the temperature is below 8c. In 2010 there was a prolonged period of warm wet weather that meant that the toads made their migration in a concentrated period of about two weeks making it easy for the SARG volunteers. Both 2011 and 2012 saw a more prolonged migration with fluctuating periods of warm and cold, meaning the migration was on and then off over the course of four or five weeks. This made it much more difficult for Jan and her team to know when they might be moving. The volunteers also only collect in rush hour between around 6.30 and 8pm, so they are not able to record the numbers moving later in the night.

This year’s migration started in earnest on Wednesday 6th March, around 100 toads were collected Thursday and Friday with slightly less last night as the temperature started to drop. Over the course of the next few days the forecast is for sub zero night time temperatures, so the migration will be off again until it warms up. We’ll keep you posted.

UPDATE: There was a pause in the toad migration shortly after writing this post as cold weather and even snow moved in over Easter and lasted for two weeks. The weather improved in mid April and by the 16th the migration seemed to be over. 1,322 toads were counted and rescued between March 6th and 16th April, which was up on 2012 by 372. 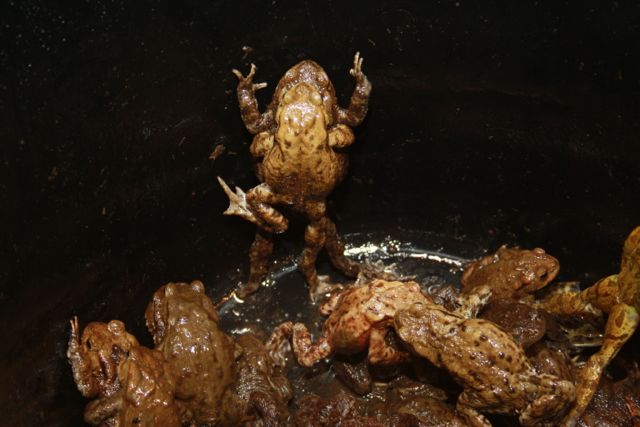 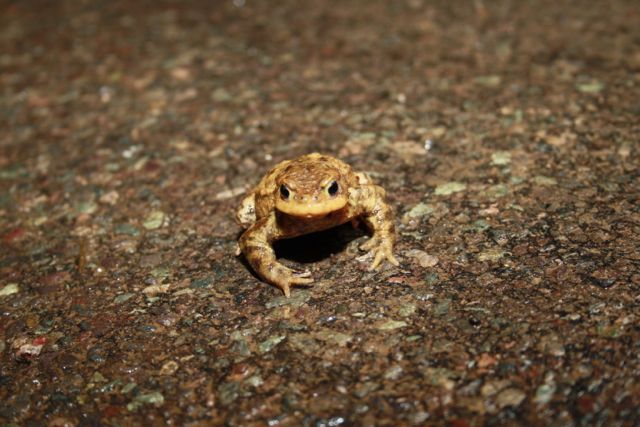