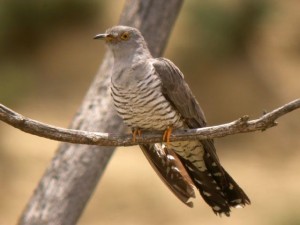 Have you heard a cuckoo yet? The cuckoo’s iconic call  is a sure sign that spring has arrived.  After the long stretch of cold weather during March and much of April, the warm weather last week has set an explosion of colour all around the Surrey Hills as Spring seems to have rushed in.

The same seems to be true of our migrating birds. A cuckoo was first heard at Woodhill Cottage here in the Surrey Hills on Monday 22nd April. In 2012 it was 10th May and 2011 10th April.

Last week’s southernly winds coming up from the Mediterranean may have helped these birds on their migration from North Africa and the Med. Our other very welcome summer visitors from that part of the world, the swallows, also arrived on Monday 22nd.  You can usually set your calendar by their arrival, in both 2011 and 2012 the first of the swallows arrived on the 16th April. Quite frankly I don’t blame them leaving it a week longer this year.

Please let us know when you first hear a cuckoo, or see the first of the summer swallows, by leaving a comment on this page.