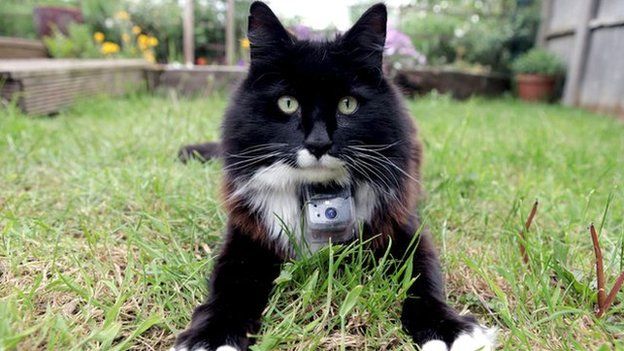 A team from BBC Breakfast were in Shamley Green this morning, broadcasting live outside the Arbuthnot Hall, promoting Horizon’s The secret life of cats documentary which is to be broadcast on BBC2 and BBC2HD Thursday 13th June at 9pm.

Horizon and a team from the Royal Veterinary College descended on Shamley Green in April to conduct one of the largest ever research projects into the behaviour of the domestic cat. They used GPS trackers on the collars of around 40 cats in Shamley Green with interesting results. Tonight’s programme will reveal how the cats visit each others homes, timeshare territory to avoid confrontation and it even shows one cat in a confrontation with a fox.

GPS collars were fitted to the cats, together with mini cameras so that the team could track the cats and film their behaviour – all from their HQ in the Arbuthnot Hall.

10 Shamley Green cats are amongst the cats shown in the programme, Ginger, Chip, Sooty, Orlando, Hermie, Phoebe, Deebee, Kato, Coco and Rosie. You can meet them and  track their movements around the village by clicking on this link to the BBC interactive Secret life of cats page.

The programme will be available on BBC iplayer from 10pm Thursday 13th June.

A follow up programme Little Cat Diaries takes closer look at the cats who stood out in the experiment including ‘the intruder’ cat, a tom cat that visits the village and seems to have no owner; ‘the hunter’, a cat that seems to prefer to catch and kill its food rather than eat anything its owners feed it; and ‘the deserter’ cat who has abandoned his home in favour of another set of owners. Little Cat Diaries will be broadcast at 10pm on Friday 14th on BBC2 and BBC2HD.